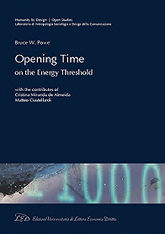 OPENING TIME
on the Energy Threshold

with the contributes of
Cristina Miranda de Almeida
Matteo Ciastellardi

We are at the beginning of a great new cycle, a second Renaissance of technology and mind, spirit and creative energy. It´s the time when the noosphere experience evoked by Teilhard de Chardin is coming into being James Joyce spoke of “closing time” in Finnegans Wake. Leonard Cohen wrote a song with this title. The philosopher Norman O. Brown wrote a philosophical-poetic work called Closing Time in 1973 in which he proposed the end of one era and the beginning of new mysteries. He did so by combining Joyce and Vico. Our work is a reply and an extension of theirs. But we are contemplating and exploring openings. What does it mean to stand in the open of the noosphere of new consciousness? What does it mean to be at the opening of a cycle of being and becoming? Opening Time is a threshold process that combines text, images, sound, delivery agency, and hypertext in a bold experiment that explores the nature of openings in ideas, stories, pictures, music, and the internet. It is a collaborative process that seeks to at once evoke our crux, and also to engage users in a new kind of electronic platform.


Bruce W. Powe is a Professor of Humanities at York University. He is the author of a number of influential books including, among others, The Solitary Outlaw (1987), A Canada of Light (1997), Mystic Trudeau: The Fire and The Roso (2007), Marshall McLuhan and Northrop Frye, Apocalypse and Alchemy (2014) and Decoding Dust (2016).

Opening Time: On the Energy Threshold