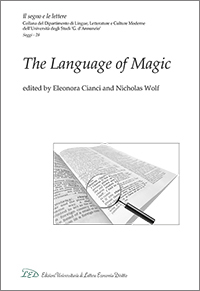 THE LANGUAGE OF MAGIC

This book contains a selection of fourteen papers presented at The Language of Magic conference (2019), organized by the Committee on Charms, Charmers and Charming, part of the International Society for Folk Narrative Research (ISFNR). The idea of focusing on the languages of magic is connected to the genuine value of verbal charms. They can be considered as parole acts that refer to the actual instances of the use of a langue, that is, magic. Those speech acts may be oral or written, spoken, whispered, sung, carved on objects, carried on or swallowed. However, they must be expressed in a specific fashion and language to gain the necessary power. Many scholars in the last decades have studied charms in many fields according to different research approaches: anthropology, folklore, history, religious studies, history of science and medicine, literature, philology, and linguistics. In this book, subjects range from the study of magic formulas in the Middle Ages to the modern rituals still practised in northeastern Europe. Studying the power of words in magic reveals its unexpressed potential and unlocks new research paths.

Nicolas Wolf (New York University) – Historian and data management librarian. His research area covers the social and cultural history of the Irish language, Irish popular religion, and Ireland’s population history. He is the author of An Irish- Speaking Island (Madison, The University of Wisconsin Press, 2014).

Click on the contents to read the full text

Undoing the “Evil Eye” in Italy: A Comparison of Folk Documentation from 1965-70 with Present Research
Lia Giancristofaro

The Dream of the Mother of God and Its Oral-Written Performances, with Examples from Early Modern and Contemporary Romanian Tradition
Laura Jiga Illiescu

Euphemisms upon the Example of Incantations
Mare Kõiva

Urine for a Treat! Or, How to Cure Urinary Disease in Early Medieval Ireland
Ilona Tuomi

Magic as a Statement of Power and Weapons of the Weak: Heroine of the Russian Epos
Inna Veselova